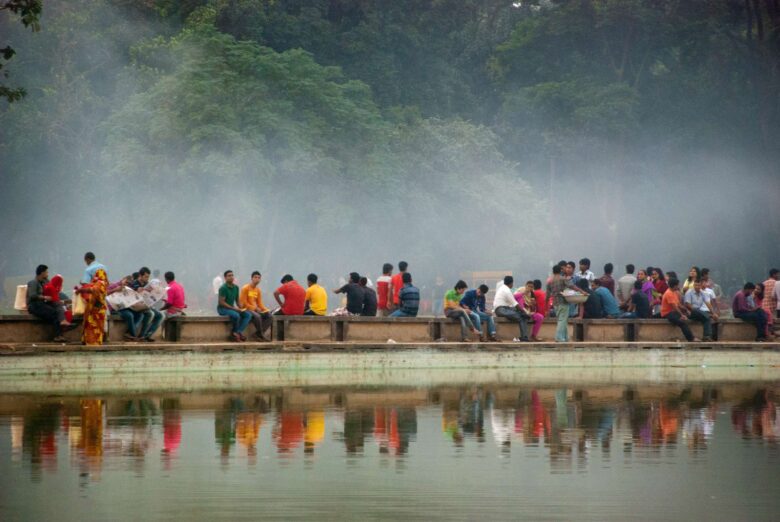 What if density is not the evil it is often cited to be? Cities by their very nature are the epitome of human interactions and innovations; and in doing so, they have made a remarkable contribution to improving the state of our lives and communities. No other platform enables a critical mass of humans to interact, work and live in close proximity, and to generate innovation, creation and collaboration on a large scale as cities do. For all these to function properly, density is a key factor.

George Vaillant, a Harvard psychiatrist directed the famous Grant Study[1][2] from 1972 to 2004 to understand the secrets to happiness and a fulfilling life. The study shows that embracing social connections helps us live longer, and be happier. It concluded that the core of human happiness lies in these interactions and relationships. The question is: How do we enter this world of interactions? How do we meet people beyond our family and neighbours?

It is cities that offer us the opportunity to belong to several communities at one time. These opportunities often come randomly and serendipitously. Sometimes they also arise through organised formality which is perhaps the beauty of large formal groups or fraternities. Whether random or formal, accidental or organized, all these are very much conditions of the urban phenomenon.

It is often argued that a fast paced urban lifestyle is killing human interactions. The opposite also might be true, as we in one way or another belong to some large fraternities, perhaps an alumni group, club, neighborhood groups, pubs, coffee shops, fairs, festivals, or even international networks of organised communities. Communities that gather, exchange group messages virtually and physically, take up new initiatives, organise charity events, or put up protests. We might be hardly in close relationship with, for instance, two or three people of these large groups, but the possibility that these fraternities offer is important. A little event, a get-together, a picnic, an excursion, or a workshop possibly can add new close relationships with almost completely random people whom we would have otherwise never met. We have to agree that such modes of connections and relationships are made possible by the urban lifestyles that are offered and practiced in cities. Eventually this contributes to our overall happiness and well being, and arguably, happiness is what we are all pursuing. 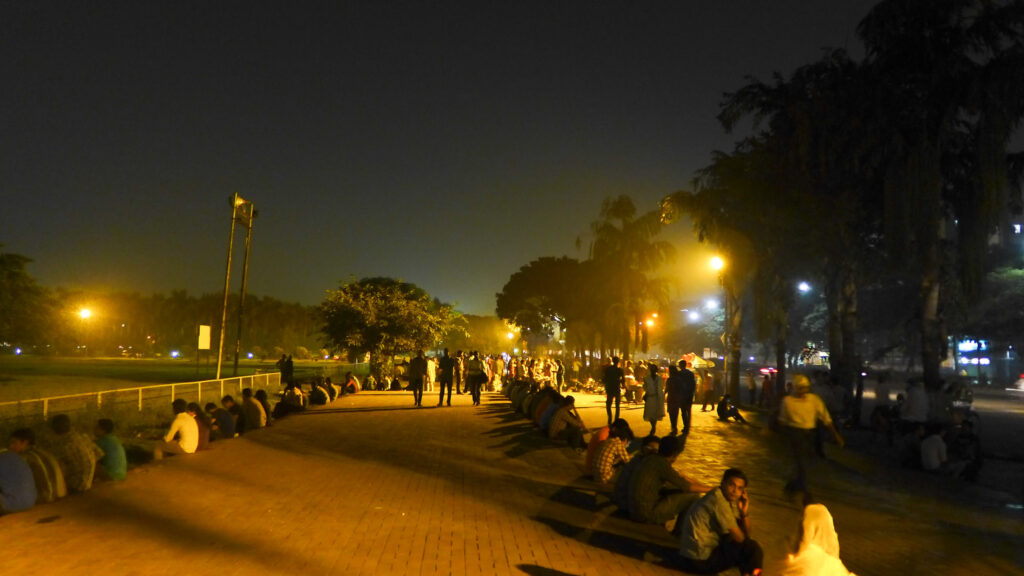 Population density plays a big role in the size, nature and diversity of these fraternities. The sheer number of random possible encounters at a coffee shop in Dhaka is incomparable to a small town in Northern Ontario, and it is because of the density of the place. Often people talk about the charm of knowing everyone in a town or neighbourhood. We fantasise the past for this, however, in the long run, it may not assure happiness! A small town of tightly woven communities offers little individual freedom, and much less random encounters which could lead to new meaningful relationships.

The idea of going back to the isolation of nature sounds magical, but it miserably fails when it comes to human interactions. You can fancy a vacation in a remote island for a few weeks, but settling there would not necessarily make you happier. There is also a good chance that it wouldn’t help the environment either. Every new settlement on every new island in history alters the ecosystems forever, often bringing development which results in extensive damage. Commonly-known examples include Madagascar[3][4] and Australia[5] where human settlement wiped out about 90% of the big mammals of both these islands in just a few years of humans settling in.

For many of us, cities are the future, and they can be good for the environment and us, if we know how to design them well. How? Concentrate, form tightly knitted diverse clusters, avoid sprawls, and think about how to foster more and more of this uniquely urban phenomenon, the new fraternities.

Density makes possible public transportation, mobile networks, Internet, water and sanitation facilities, and human interactions to be more efficient. Never before did we know how dense is unbearably dense, until Dhaka happened. This city is the fastest growing, densest city on earth. Interestingly enough, Dhaka is not sprawling that fast as it is ‘growing’; it is rather growing in density, and not quite in physical size. Such a condition brings in some inherent problems which are possible to be solved. 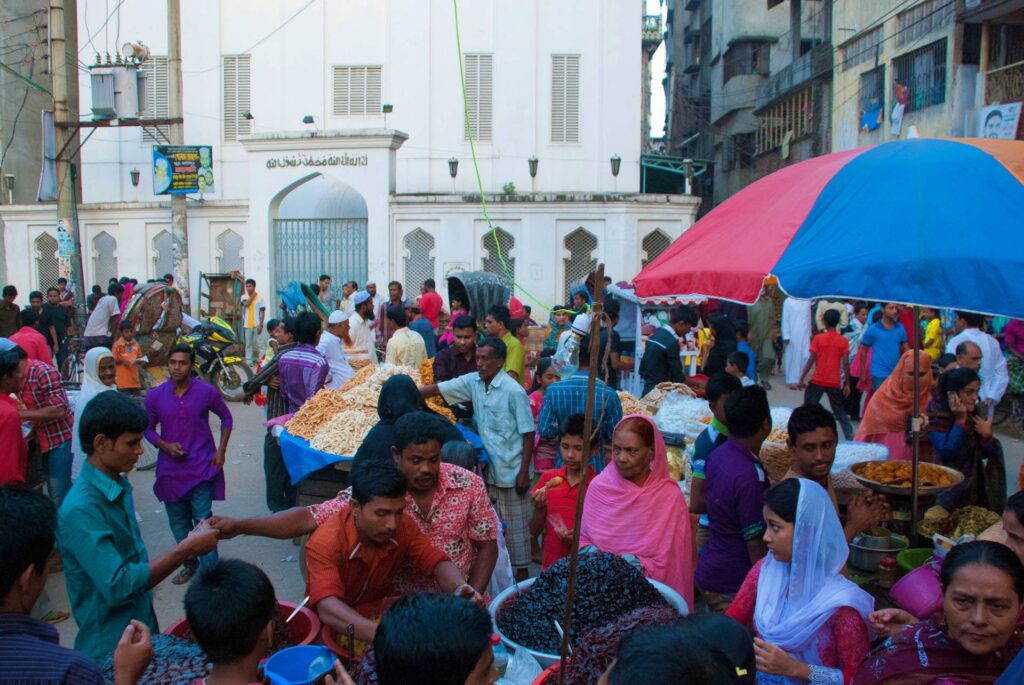 We need to stop pandering to the idea of decentralisation and reduction of density as a solution to all our problems. We have to give density a chance. Embrace it for a few more decades, see where it takes us. We never knew mobile phone service can be this dirt cheap, serving this huge number people using the same infrastructure. We didn’t know that it is possible to supply water to fifteen million inhabitants using only about 2000 km long pipelines charging only 6.6 Taka ($0.08 USD) per cubic meter (1000 litres)[6]. Dhaka WASA has about 300,000 domestic and commercial connections. This may seem low, but in most of the areas of Dhaka, each connection may serve up to 1,000 households. The magic behind this, is density. If keeping our ‘footprint’ small on the planet is a concern, why don’t we take the idea literally, and pack ourselves in places that is as dense as the future technology allows us to be? Leave our rainforests and oceans to flourish and regenerate, and function as the lungs that our sick planet needs, and be the spaces that animals need. In that way, the natural conditions will be there when we need them too.

The radical New York urbanist Michael Sorkin in a conversation at Bengal Institute once said: “To cross the street in Dhaka is kind of a constant negotiation, as the traffic is slow, it is somewhat democratic and autonomous, it simply just works, without much of modernist controlled or rigorously zoned techniques. Every means of movement is isolated in the modern western cities. I find it problematic, they need to negotiate organically and find ways.” Renowned urban designer Gary Hack made the point quoting a model designed by the famed Dutch architecture practice BIG (Bjarke Ingels Group), that in near future we do not have to segregate and control the vehicles and pedestrians anymore; autonomous vehicles can simply find their ways automatically, in a pseudo-organic fashion. That would bring back the belongingness and ownership of the city to its citizens. We want to walk, and we want to walk freely, everywhere. Moreover in a highly dense mixture of urban clusters, we all want to walk to work, shop, play, learn and live. We want to walk keeping our heads high, and not looking for zebra crossings or pedestrian signals. As pedestrians, we set our own rules of walking about. Let the vehicles find their ways on their own, make them intelligent enough to leave us alone freely enjoying a walk. That’s the future city we would like to head to. 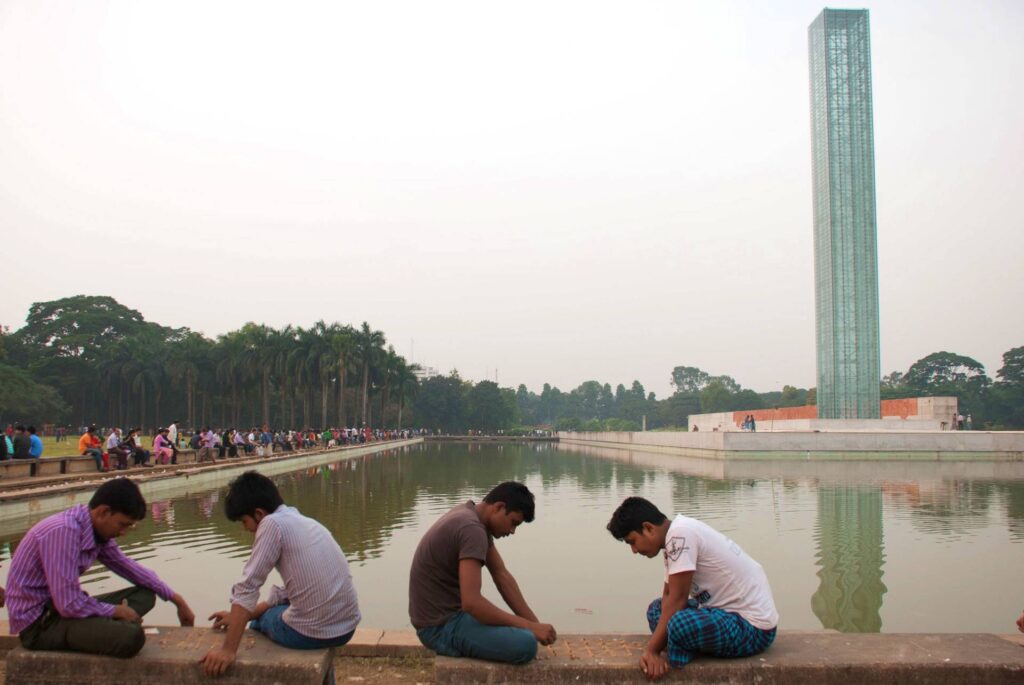 Often these participants of the makeshift boardgames are all random | Ramna area, Dhaka | Photo: Mohammad Tauheed

Half of the world’s population is now living in cities. Many fear mongering “think-tankers’ are busy making headlines describing this as our biggest problem. We should rather be focusing on creating densely efficient yet green and happy urban clusters. Living, working, production and interaction should happen within a few walkable blocks of cities. The cost of rent in the city-center versus commuting cost from the periphery is a constant battle. We should focus more into creating autonomous, dense clusters of various mixes, rather than a centralised CBD and far away residential areas. We also have to be careful about the potential danger of so-called ‘smart cities’ with a centralised brain, that has the possibility of affecting the diversity and autonomy of communities. Everyone working in a neighbourhood must be able to walk to work, and live in the neighbourhood; here ‘everyone’ means everyone, including the domestic helps and janitors for example, otherwise it would be a failed neighbourhood. These clusters should have access to their own funds or means of raising its own operating capital by crowdsourcing, with a ‘people first’ attitude.

Invoking the ‘S’ word here, if we want a sustainable and happy world, we need to foster more interconnected large fraternities that offer random and diverse personal connections, in densely populated autonomous urban clusters. With, of course, a focus on continuous social and technical innovations. We need to start believing in cities. We have to embrace their growth and density, they are not the culprits, rather the key to improving the state of our lives. We have to look into the conundrum of density for Dhaka, and find the virtues in it.

Originally published on the newsletter-magazine of Bengal Institute: Vas —Issue 04. 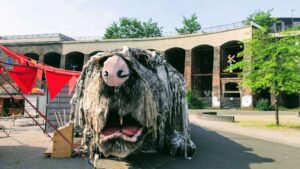 The Primary KPI of the Collective Wellbeing of a Neighbourhood