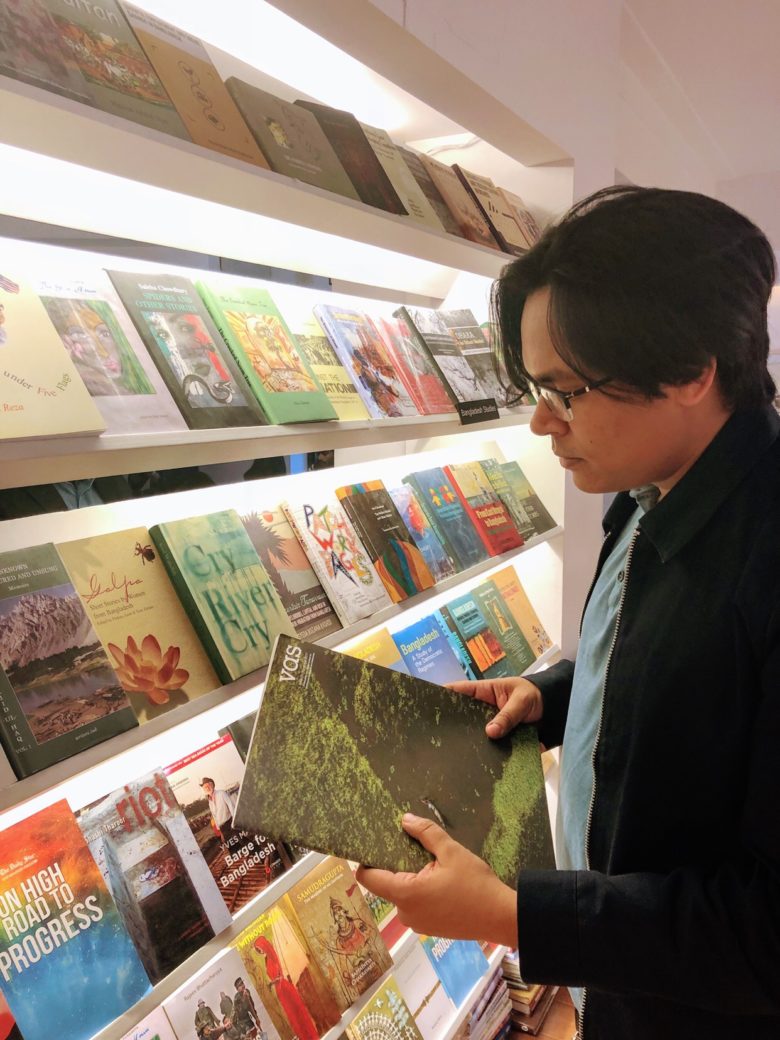 Vas is the newsletter-magazine of Bengal Institute for Architecture, Landscapes and Settlements that I edit. Started off as a newsletter reporting different activities of the Institute, it is now gradually turning into a magazine focusing on various op-eds and reports on architecture, design, cities, environment, arts and humanities. Since last few days the 3rd issue of Vas is now being sold at Bengal Boi.

It all began when I decided to archive anything and everything that happens at Bengal Institute, an unlikely move in local culture. We Bengalis are not good at archiving, writing and publishing, it is not in our blood. I realized it even more, when I traveled to the United States quite a few times. Documentation, archiving, publishing, presenting and eventually promoting is an integrated multidisciplinary art, which Americans are masters at! A demonstration of five people in front of an establishment for a niche cause would already have a website, a name, a hashtag, accounts in all social medias, there will be dedicated people for media and public-relations, posting, photographing, videotaping and updating every tiny detail to make it look as if it is the biggest movement of our time. At the beginning I found it difficult to digest. It seemed like a over-selling, narcissistic mechanism of selling a cause, I frowned upon a little. But I also was a preacher of the phrase that “if it is not available in the internet search, then it doesn’t exist,” no matter what it may be!

I made it my mandate that I will photograph, note, record everything at Bengal Institute. BI has an amazing motto of working towards creating an informed conscious generation of thinkers and doers who would jump into the overarching mission of ‘Designing Bangladesh;’ with the leadership of Kazi Khaleed Ashraf and the Chairman of Bengal Foundation, Abul Khair. These two visionaries have been inspired by Muzharul Islam’s long lost dream of ‘designing every inch of Bangladesh,’ Bengal Institute literally have taken up that mission. With post-graduate, multidisciplinary, short-course academic programs and a thriving research and design program, BI is producing massive amount of contents, knowledge and ideas which we could share to the global bank of information, through as many media as possible.

I started documenting everything starting from 1st August 2015, the day our academic program launched. Google Doc being my favorite, most versatile tool, a single shared doc file became by note-taking and file archive platform. After the first semester, I shared it with Kazi Ashraf and Luva Nahid Choudhury. Both were excited and professor Ashraf came up with the idea to publish a printed newsletter, he said, why don’t you simply put these note up for designing it for print? I was a little startled, as those notes were just for my personal and internal record of the day-to-day activities of the institute, I didn’t write for publishing. I was taking notes just for archiving. Kazi Ashraf was convinced, that these notes are good enough for publishing, I was still hesitant. Then I started editing all those notes, and started compiling photos, videos and all other recorded materials. Faisal Huda, our then academic associate, helped me in many ways with the compilation of information. Imran Irteza Tonmoy and Rashed Chowdhury, jumped into designing the printed version of the newsletter based on the epic Google Doc. And they did a terrific job! Vas-1 was mostly reporting of events, and publication of works by our participants. I am still proud of our first semester at Bengal Institute for the quality of participants and their works, it is still the best one. Although Vas-1 was just a rudimentary compilation of small reports now, yet it is beautiful. Here is how it was

Our academic team grew a little bigger, Farhat Afzal and Muntakim Haque joined. Both of them became tremendously helpful in bringing out the second issue of Vas. Both joined ‘after’ the timeline of Vas-2, i.e: they had to write and compile information about the events and people they didn’t know anything about. It was a collossal work to collect and archive all the information and putting it into a magazine format. Again, Irteza Amin was to rescue us with yet another beautiful design. And this is how it was:

Vas-2 already began the quest for transitioning it into a magazine with op-eds, from a mere newsletter full of events reporting. Still the events at BI have their own charm, because of the people we feature. From Gary Hack to Balkrishna Doshi, Bengal Institute have been lucky to invite and host some of the biggest thought leaders of the world of deign, architecture and urbanism.

In the third issue, we pushed it even more towards turning most of the writings into articles. More, reading materials, than simple flip-through image-based reporting. Not sure how much we could do it, but I think it is going there. Check it out digitally here:

Now that it is available to purchase at Bengal Boi, go grab your copy! 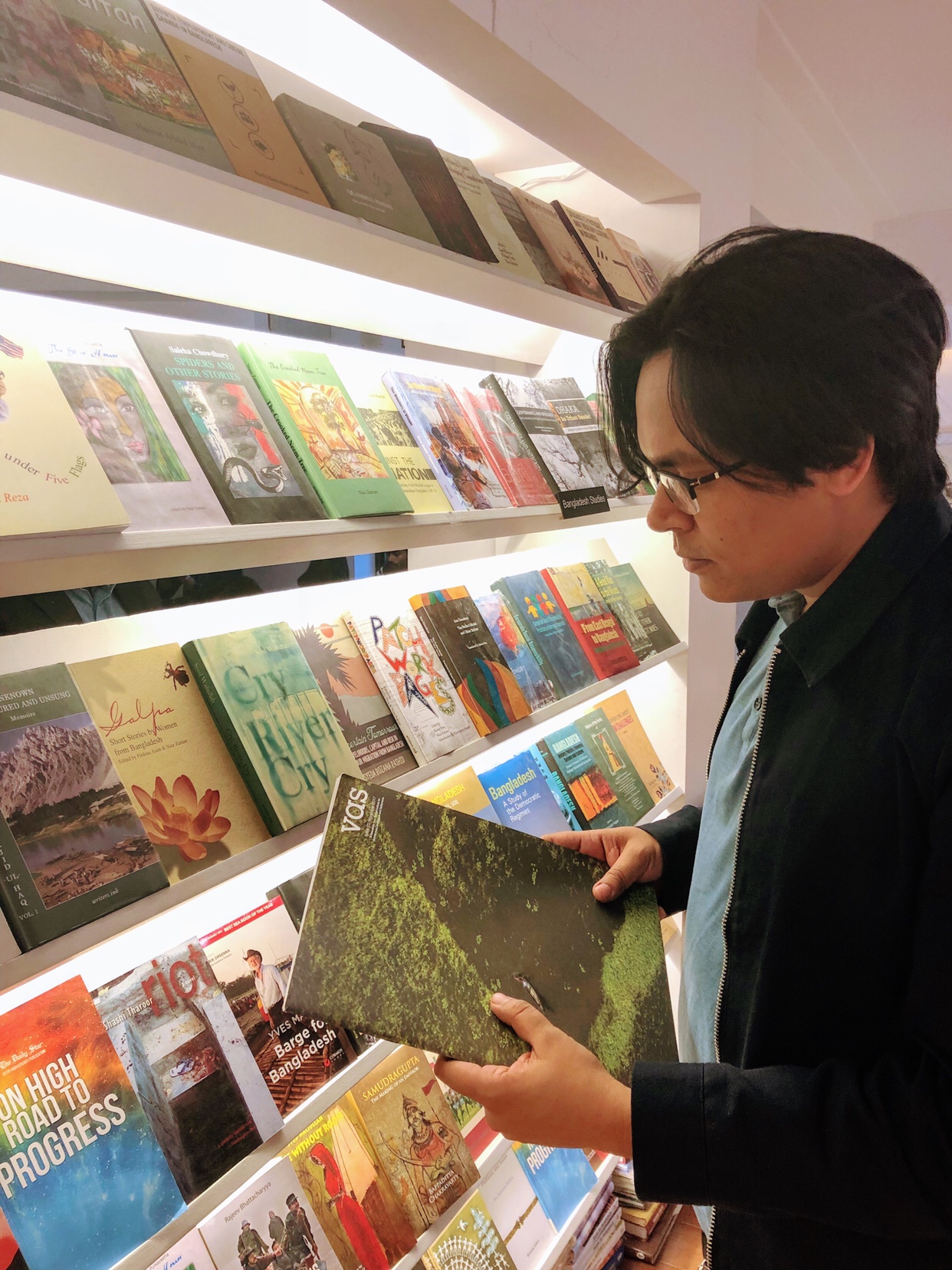 This photo of me with a copy of Vas-3 is shot by my friend Farhana Psyche Sufi at Bengal Boi on 20th January, 2018.